Of Valkyries and Life Released

So, this is my second time releasing a VN, it feels like a big achievement, even if this was supposed to be only a side project. To be honest, I originally started this one as a NanoReno project, meaning it was supposed to be completed during March, but, well... Uh, stuff happened and...

Nevertheless, it's ready for download at http://www.indiedb.com/games/of-valkyries-and-life (free, donations appreciated)

Looking at my files, the final word count was just a little above 10 000, the story count is 3 and the number of total endings 5. I love both the music and art I was provided for this game, but I do regret not making something bigger out of this...

Oh well, comments and questions on the project or future ones are welcome too.
Posted by Desulishor at 9.6.14 No comments:

Time to update this thing... I've been working on a new project, aptly named 'Of Valkyries and Life' which is a tri-arc compilation of stories, all somehow connected to winged girls. These girls are indeed humans, yet carry wings on their back, leading to all sorts of situations. The idea is to deal with responsibilities, expectations and one's own life's worth. I'm not wizened enough to write such stuff, but hopefully it's still  enjoyable to read. In terms of genres, I guess it's a combination romance, slice-of-life and fantasy.

The artwork was provided by a friend of mine @ http://xxlei-chanxx.deviantart.com/ or alternatively http://sketchy-ness.tumblr.com/ while the in-game music was produced by Marc Tabula @ http://starryai.mctabula.com/marc/ and Trass84 @ https://soundcloud.com/trass84

This VN will be released on http://www.indiedb.com/ and on Desura later on, more info there and then.
Posted by Desulishor at 4.6.14 No comments:

Coming soon to a Desura near you!

Project Dualis is set for a Desura Release on Nov 1st, and will be featured on the popular Freedom Friday bundle. As before, it will be available for free on Win and Linux platforms but any donations are appreciated.

Hum, I guess that's everything. Maybe next time, I'll blog about the project I've been working on lately.
Posted by Desulishor at 19.10.13 No comments:

It's done! Uhh... so? Just go and download it already. It's completely free and available on IndieDB.

Tell me what you think, and if you liked the work, feel free to leave a donation. All the money will go directly for the next project/s.

This is only a small post before the official announcement, but I'm happy to say that Project Dualis will be ready to be released in mid-August, perhaps the 17th or 18th, since those are the dates of a local con, but maybe even a few days prior to that, if I get impatient for some reason. In the end, I feel like the whole game's a bit short and unpolished, yet it still took a few months short a full year to complete...

Anyway, big reveals are that:
-Fully voiced from main cast to narration
-Will be freely distributable, and the official sources are on indieDB and Desura.
-Donations will be accepted at this blog site, used directly for any future projects. (And that Miku Append figurine I've been dreaming of... Just kidding.)
Posted by Desulishor at 8.8.13 No comments:

I haven't really bothered to keep this blog up to date, so all the new stuff gets clumped in this one post. But here we go:
1.There's a new project page on indiedb, and plans to publish the game on Desura once it's ready.
http://www.indiedb.com/games/project-dualis

2. DrawingNeko has finished her artwork on the project, and we're nearing completion overall.

that's all for this time (as if anyone actually follows these) but let's just say i have a duty to record it for the future, when people will finally understand my greatness. (for sure!)

(To be updated with more pics)
Haru: A first-year student at Kakunoshima high. Our protagonist is snarky at times and a bit too smart for his own good. Though he has a tendency to dream big. 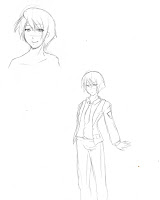 "If someone had stopped me to ask what I was actually doing, my answer would have been something along the lines of 'To seek solitude...' Apparently, I thought there was something cool about being alone."

Keita: Haru's classmate, self-proclaimed 'bro' and best friend from middle school. He's always on full power setting and a little annoying to be around, though he means well. Currently dreaming of setting up a school band.
"C'mon, it's you and me, bro. What do say?"

Yuki: The shy, silent and lonesome bookworm. She just has a bit of trouble communicating her feelings, but in fact she's surprisingly talkative and tends to dream even bigger than our protagonist.
"Um, I just like to read..."/ "Plenty of other parts were missing as well. The girl had no legs, only her left arm was functioning properly and most importantly, she had no heart. The girl was mechanical, a machine." (a passage from her stories) 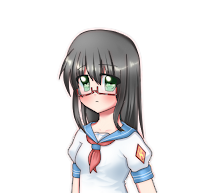 Yumi: The polar opposite of her sister, she's aggressive, realistic and straightforward. She appears strong on the outside, but she has only grown up that way, since she feels that she has to protect her sister.
"Huh? Got something to complain about?" 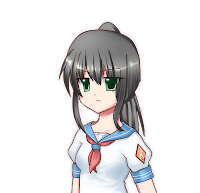